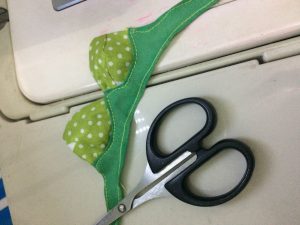 i have been making bra for my other mini bjd. I have made 7 pattern version, not include the sub-version. 😂😂😭😭. This one is the best but I wonder if i can make better. haha

It was not that difficult actually but the NIPPLE position of the body is odd. It is not at the peak of the breast, instead, it is slightly above the peak. So  the coup was actually OK and FIT perfectly but the nipples were seen! I had to change the shape of the bra so the nipples wont be exposed but the bra may seem odd! So, today, i made a lot of adjustments. Never do this many when working on another body. Usually, I only modify the shape. I learned a lot by making this bra.

I will sell it later on my etsy. Actually, i wanted to make it quicker and tried to sell it but the nipple held me back. 😂😂.

Btw, the sewing quality for bra for selling purpose of course will be better than one on the pic. I was too lazy and tired to do neat sewing and finishing.   I just sew it as long as the marking is sewn or folded precisely.

The bra will be part of Watermelon 🍉 (colors) series of design. I spent too much time with this bra. I am sooo tired.